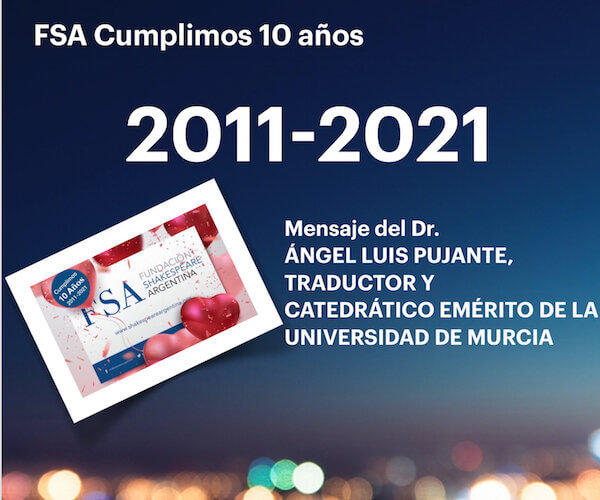 We share and appreciate the warm message of congratulations to the directors of the Fundación Shakespeare Argentina for the tenth anniversary of our institution sent by Dr. Ángel Luis Pujante, member of our International Advisory Board.

It will soon be ten years since our paths crossed in La Plata, where I came to take part in the 10th Conference of Comparative Literature, and only a few months after the Fundación Shakespeare Argentina got under way. Ten years is more than a decent period when one now sees that the initiative is still very much alive, even in the midst of one of the worst nightmares of our time. And if that initiative is named Shakespeare and is sustained and encouraged as you are doing at the Foundation, it could not be more valuable.

As you know well, ‘Shakespeare’ is many things. We may or may not like Shakespeare as an author, but he is very ‘important’, and what is important is not a matter of preference, but a cultural fact. By the same token, it is to be understood and dealt with in different ways and at different levels. Those who deal with it should understand and be sensitive to its various aspects and to the worlds in which they manifest themselves: cultural, academic, theatrical, political, commercial. I am certain that you have never lacked this awareness, that you have always tried to connect these different aspects and that you have always gone about them efficiently and with savoir faire.

A round figure of ten is a very apposite number to celebrate an anniversary, In my case, it is a reason to keep alive a very cordial relationship. I cannot forget the interest you have shown in my Shakespearean efforts, nor will I be able to thank you enough for the generosity with which you welcomed me in Buenos Aires in 2016 on the occasion of the Shakespeare and Cervantes celebrations.

For all these reasons, my warmest congratulations, a very happy first decade anniversary and many happy returns.

He has lectured at numerous Spanish universities, as well as at the Universities of Manchester, Leeds, Hull, Oxford, Lisbon, Oporto, Coimbra, Mexico (Nacional Autónoma), Pisa, Bucharest and La Plata, and at various institutions such as the Globe Theatre in London, the European Comission (Brussels and Luxemburg), the ‘Museo del Libro y de la Lengua’ in Buenos Aires and the National Library of Uruguay.

He has published mainly on fantasy and science fiction, English Renaissance drama (Middleton and Shakespeare), and literary translation, especially of Shakespeare’s plays. He is the author of Realismo y ciencia-ficción en la obra de John Wyndham (1980) and of an annotated Spanish translation of Thomas Middleton’s A Game at Chess (1983).

In 1998 he was granted the “National Prize for the Best Translation” for his Spanish translation of The Tempest.