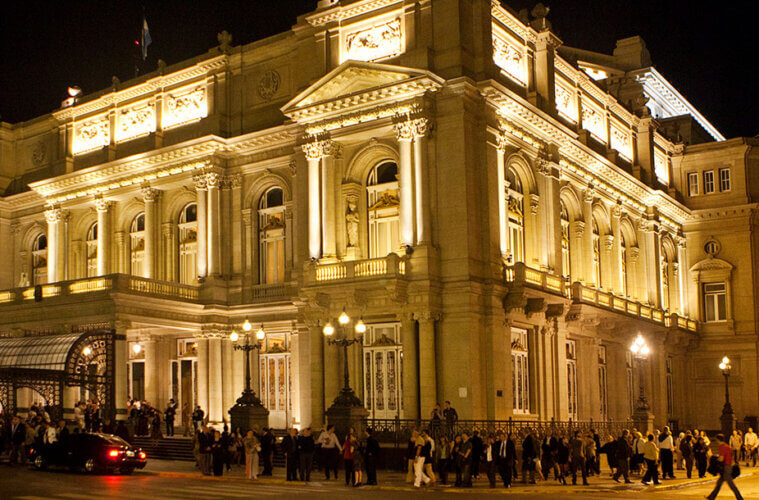 Since the inauguration of the Teatro Colón of Buenos Aires in 1908, the works of William Shakespeare was represented hundred of times through operas, music, ballets and wonderful pieces based on Shakespeare´s work. The most represented were the Operas inspired by him such as Romeo and Juliet by Charles Gounod, Falstaff, (based on The Merry wifes of  Windsor, and Henry IV), Macbeth  and Otello by Giuseppe Verdi, Hamlet by Thomas Ambroise, Beatrice and Benedict (inspired on Much Ado About Nothing) by Héctor Berlioz and A Midsummer´s Night Dream by Benjamin Britten, among other.

Most of them were represented at the Colón in more than a dozen of seasons but the most popular was Falstaff represented more than twenty seasons in the history of the theatre.

Following we share some memorables productions inspired by Shakespeare performed at Teatro Colón:

Image of the Programme of Teatro Colón in 1908

On the same year of the inauguration, in 1908, the Opera Hamlet (Amleto) by Thomas Ambroise, Jules Barbier & Michel Carre and

Otello by Giuseppe Verdi and Arrigo Boito, were performed by the Gran Compañía Lírica Italiana directed by Luigi Mancinelli. 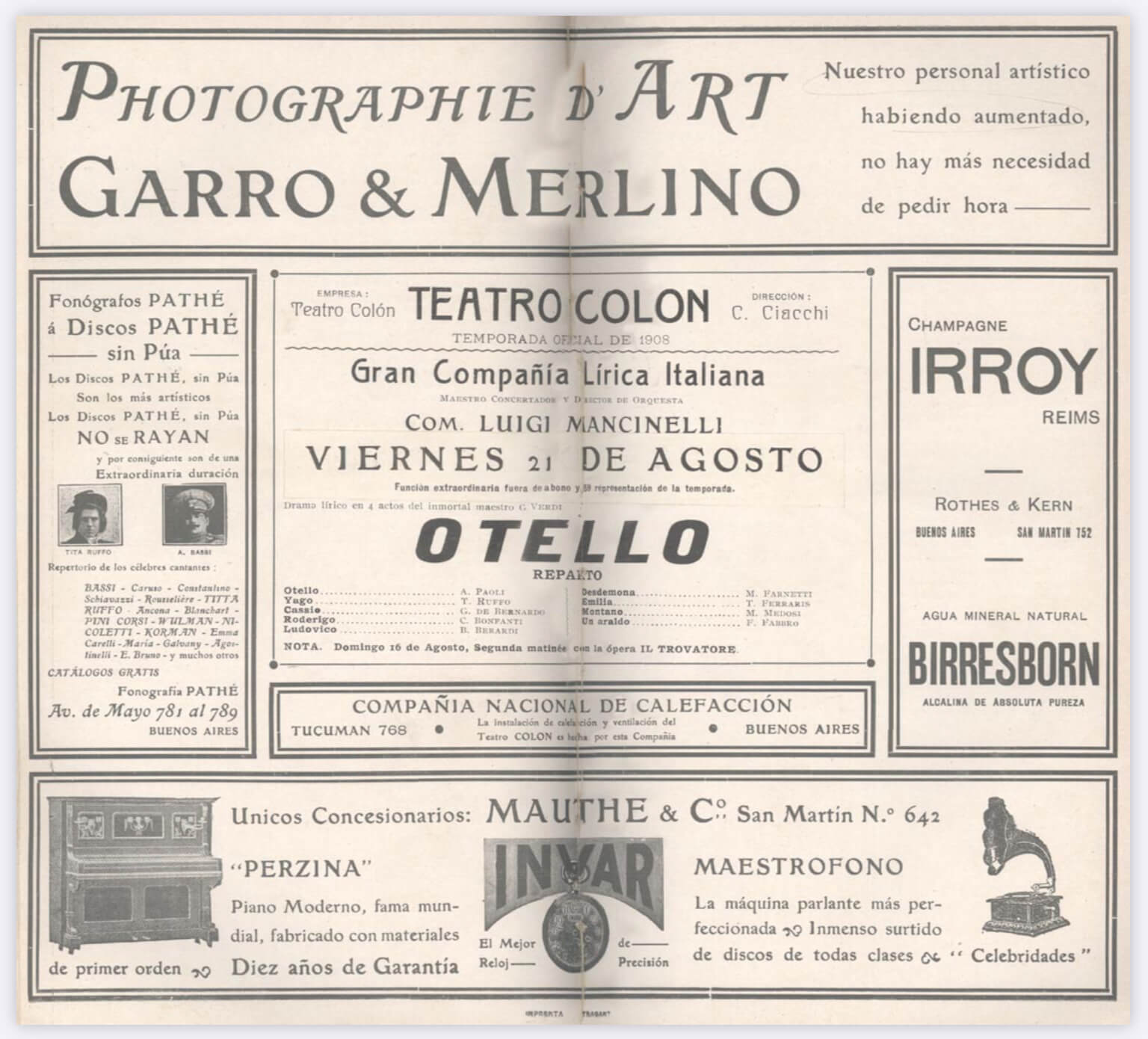 The delicious play A Midsummer´s Night Dream was represented at Teatro Colón directed by the oustanding  Director Antonio Cunill Cabanellas (1894-1969) one of the most prestigios figure of the national stage. He was the first director of the Teatro Nacional de la Comedia at the Teatro Cervantes (1935-1941) and also founder in 1936 of the Instituto Nacional de Estudios de Teatro, (INET). He was Director of the Teatro General San Martín of the city of Buenos Aires. The Department of Dramatic Arts of the Instituto Universitario Nacional de Artes,  and one the halls of the teatro San Martín are named after him. Here we share a pictures of the excellent la review published on the newspaper Democracia on April 21 1953 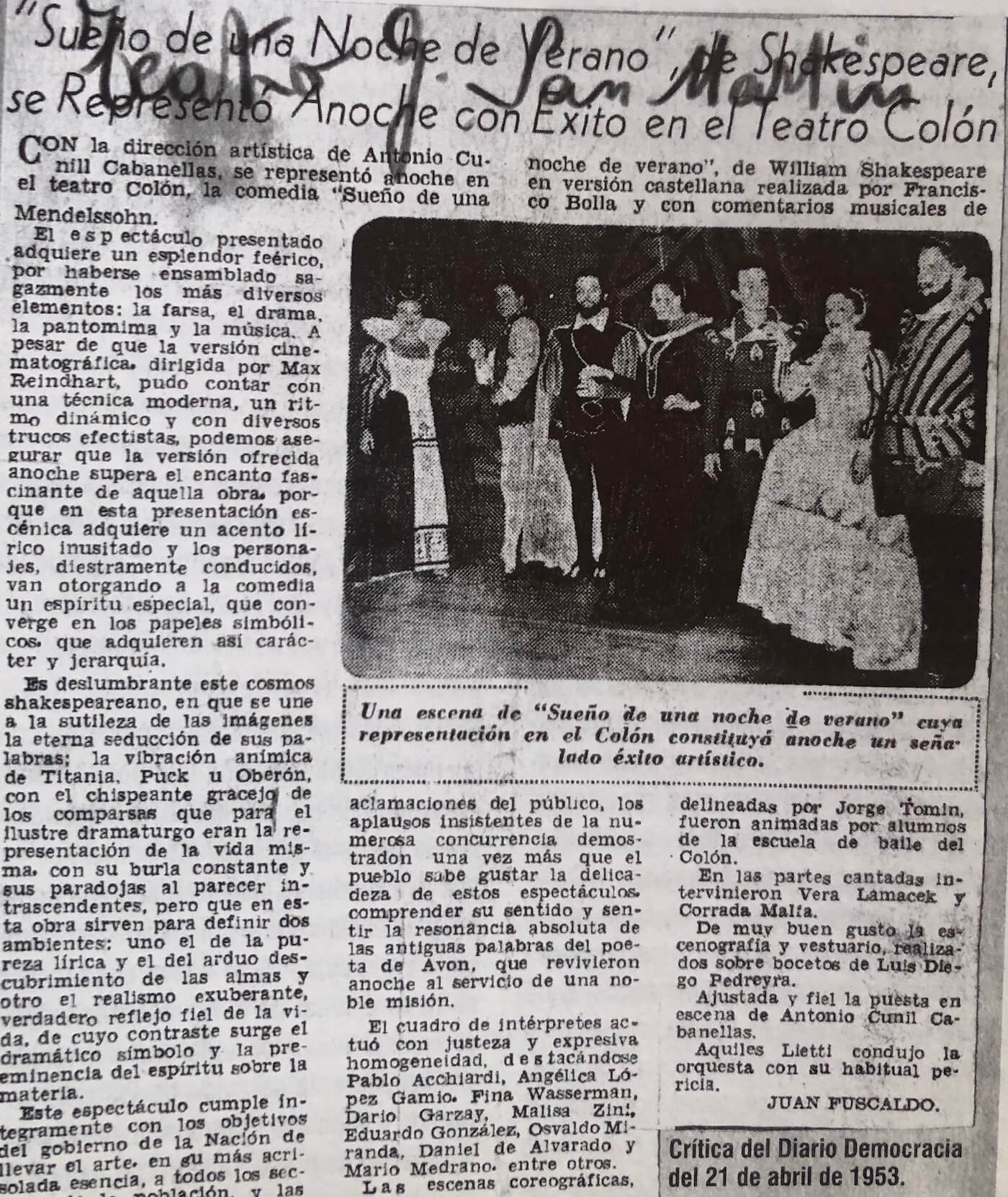 The greatly admired Argentin actor Pepe Soriano was part of the cast and has his debut as a profesional actor in this amazing production.

Listen the opera presented at the Teatro Colón on April 1999:

MACBETH, by Giuseppe Verdi adaptated by Brett Bailey on the Festival Internacional de Buenos Aires (FIBA) at the Teatro Colón

Brett Bailey is a dramatist and director of the Third World Bunfight:

THE BAN OF LOVE ÓPERA IN TWO ACTS (1836) MUSIC BY RICHARD WAGNER INSPIRED ON MEASURE FOR MEASURE  See more: https://teatrocolon.org.ar/en/season-2017/opera/produccion/ban-love

Premiered by the Royal Ballet in 1965 with Rudolf Nureyev and Margot Fonteyn as protagonists, Romeo and Juliet was Kenneth MacMillan’s signature play. To Shakespeare’s tragedy and Prokoviev’s music, the legendary English choreographer and dancer’s language, which is stark (away from fairy tales) but highly poetic, is added. MacMillan’s work is one of the essential titles in the ballet repertoire. A hypnotic piece well-known but which catches us every time as if it was the first one.

We share the words of Turismo Cultura Buenos Aires:

Teatro Colón is considered one of the best opera houses in the world, together with La Scala in Milán, the Opera Garnier in Paris and the Royal Opera House in London. Designed by Francesco Tamburini, Victor Meano and Jules Dormal, and built over 20 years, the theatre opened in 1908 and went on to host some of the most important conductors, singers and dancers of the twentieth century, including Igor Stravinsky, Herbert von Karajan, Daniel Barenboim, Maria Callas, Luciano Pavarotti, Plácido Domingo, Rudolf Nureyev, Julio Bocca and Maximiliano Guerra.