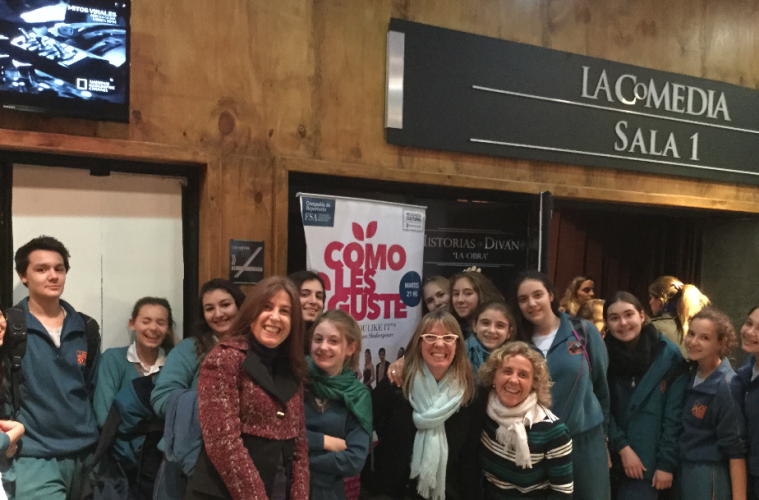 A wonderful encounter with the cast of As You Like It after the show.

Students from Nueva Escuela Argentina 2000 NEA wrote about the experience:

Nowadays Shakespeare is seen as boring or too complicated to read by young people. Nevertheless, we had the opportunity to experience that this idea is not entirely true.
It all began when our English teacher suggested that we go to the theatre and see “As you like it” – a Shakespeare’s contemporary adaptation of one of his supposedly forgotten texts.
Fourteen of us were delighted to accept such proposal, so together with María Mercere and Gabriela Balbis – started our adventure by subway after a long day at school. There was a religious rapper busker who made our trip to the theatre even more entertaining. Three blocks away from the subway station was the theatre, where a teen-aged crowd was eager to form part of this exciting experience.
The play was amazingly adapted. If we think of its ancient origin, it is outstanding the way the issues were brought to life in this modern and contemporary world, making such issues fit for teenagers’ ideas and demands without losing the spark. The performance was superb. The actors left their souls on the stage to make us have a good time. Their intense and realistic performance made us understand that Shakespeare is not as boring as everyone makes him seem. It is highly remarkable the way in which the Director managed to bring to life this play written 400 years ago and that was thought to be represented by men.
We are very happy that we were given this extraordinary opportunity.

Thank You for sharing these wonderful words!