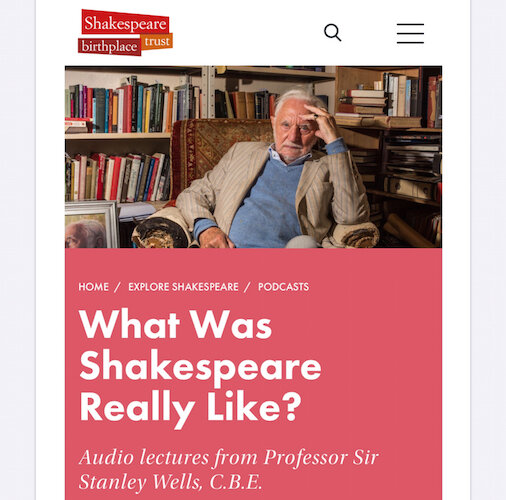 What was Shakespeare Really Like? Lectures from Sir Stanley Wells

We appreciate the extraordinary contribution to our virtual library generously gifted by Professor Sir Stanley Wells, Honorary President of The Shakespeare Birthplace Trust.

We are pleased to share an excerpt from the precious lectures delivered by Sir Stanley Wells’s on the occasion of his 90th birthday and posted on the Shakespeare Birthplace Trust Website.

You can listen to the lectures, and read the transcripts via https://www.shakespeare.org.uk/explore-shakespeare/podcasts/what-was-shakespeare-really

Lecture One: What manner of man was Shakespeare?

Lecture Two: How did Shakespeare write a play?

Lecture Three: What do the sonnets tell us about Shakespeare?

Lecture Four: What made Shakespeare laugh?

The beginning of Lecture One…

What manner of man was Shakespeare?

In these talks, ladies and gentlemen, I want to think about four specific aspects of Shakespeare’s life and work. Today I shall speak about the general problem of discerning the personality of a writer who spent a lifetime of creative activity in depicting people other than himself. In my second talk I shall address the question of how Shakespeare set about the task of writing a play. Thirdly, I shall ask what we can deduce about his personality from the body of work in which he seems to write most directly about himself, his sonnets. And finally I shall ask what made him laugh.

First, then, how can we hope to know what he was like? It’s a question that characters in the plays ask about other characters. When a nobleman intrudes upon the revels in the Boar’s Head Tavern (1 Henry IV, 2. 5.295), Sir John Falstaff asks ‘What manner of man is he?’ In the same scene [lines 422-3] Prince Hal asks Falstaff, who is standing in for King Henry, ‘What manner of man, an it like your majesty?’.

A narrative account of the bare facts of a person’s journey through life, their parentage and education, their career, the ‘actions that a man might play’ do not, as Hamlet knows, pluck out the heart of his mystery. A curriculum vitae or a Who’s Who entry may supply such an account. What people show to the world around them may reveal little or nothing of their inner being, just as the visible signs of Hamlet’s mourning for Claudius are ‘but the trappings and the suits of woe.’

Biographical studies of Shakespeare vary in the degree to which they attempt to dig below the surface to interpret the facts of his life in search of the inner man. Some accounts are pretty well wholly objective. I think for example of E. K. Chambers’s William Shakespeare: A Study of Facts and Problems, and of S. Schoenbaum’s Shakespeare: A Documentary Life, and its lesser-known sequel, Records and Images, which offer raw materials for the biography that Schoenbaum hoped to write but did not live long enough to do. At the other extreme is Katherine Duncan-Jones’s Shakespeare: An Ungentle Life. It’s a combative title. She is picking up on the fact that several of Shakespeare’s contemporaries, including Ben Jonson, referred to him as ‘gentle’ (which of course could refer to social status no less than to character). In her view, the adjective as applied to his character is undeserved. Making interpretative use of absence of evidence she remarks in the blurb of her book that ‘unlike other local worthies, or his actor-contemporary Edward Alleyn’, Shakespeare ‘shows no inclination to divert any of his wealth towards charitable, neighbourly or altruistic ends’. This is not really fair, since he left £10 – half the schoolmaster’s annual salary – to the poor of Stratford, and there are also bequests to neighbours and to other persons outside the immediate family circle.

Our deep gratitude to Sir Stanley Wells and The Shakespeare Birthplace Trust.