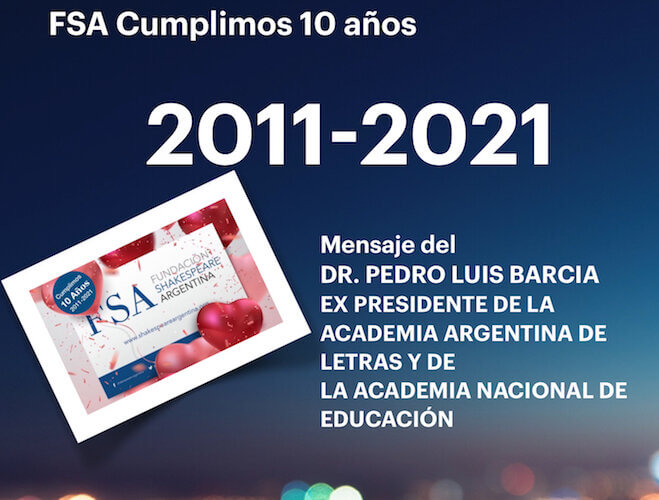 We share and appreciate the warm and affectionate message of congratulations from Dr. Pedro Luis Barcia (Former President of Academia Argentina de Letras and Academia Nacional de Educación) to our President, Mercedes de la Torre, celebrating 10 years of our institution.

Congratulations on this fruitful decade of effort and achievement.

It is clear that behind a successful Foundation there is always a spirited woman.

I wish you many decades of growing projection.

A respectful and affectionate “berceano inclin”,

In his “Miracles of Our Lady”, he says that in front of respectable images, he makes an inclin, a bow of the head, in homage. See more about Gonzalo de Berceo on the following link to Cervantes virtual Website: http://www.cervantesvirtual.com/portales/gonzalo_de_berceo/

Doctor from National University of La Plata. Corresponding Member of the Royal Spanish Academy, of the North American Academy of the Spanish Language; of the National Academy of Letters of Uruguay and from the Dominican Academy of Language.

Emeritus Professor of the Austral University.

Honorary Professor at the University of Montevideo, Uruguay.

Professor of the Master’s Degree in High Specialization in Hispanic Philology, CSIC, Spain, since 2004;

Professor of the Master’s Degree in Hispanic Lexicography, RAE-Fundación Carolina, Spain, since 2007.

Director of the Diploma in Argentine Culture of the Institute of Culture (CUDES) See more: https://institutodecultura.cudes.org.ar/el-instituto/

His wonderful book “Shakespeare in Argentina” has been available on our website since 2012 thanks to the generosity of Dr Barcia.

The aforementioned book, which is out of print, is an extraordinary source for researchers and for those interested in the history of Shakespeare in Argentina. It was written by Dr. Barcia as a contribution to the IV Centenary of the birth of William Shakespeare in 1964 and published in 1966 by the Institute of Foreign Literatures of the University of La Plata belonging to the Department of Letters of the Faculty of Humanities and Sciences of the Education of said university. The book offers a vision of the reception given to the great English playwright and poet in Argentina.

You can read and consult Dr. Barcia’s book on the following link: