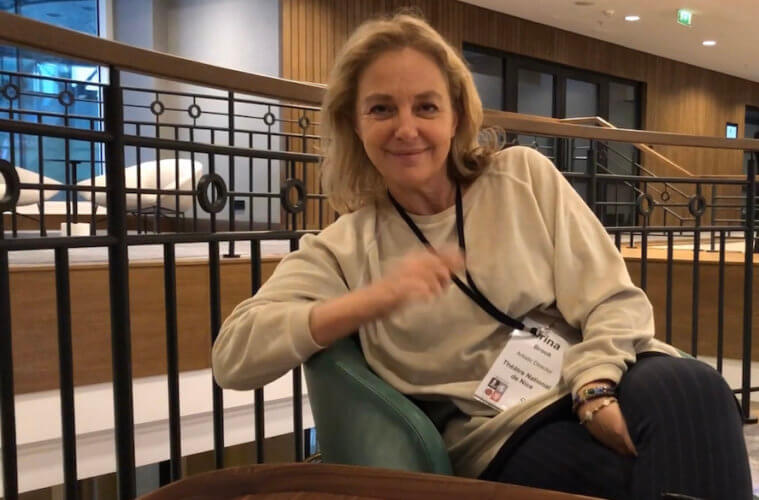 We also wish to thank STA and Prague Shakespeare Company.

Here we share a video where famous football players recite Shakespeare during the festival Shake Nice organised by Irina in France last year.

Daughter of director Peter Brook and actress Natasha Parry, Irina Brook was born into the acting profession. Born in Paris, she grew up between England and France. At the age of 18, she went to study the dramatic arts with Stella Adler and appeared in several Off Broadway theatre productions. Returning to Paris, she performed under the stage direction of her father in The Cherry Orchard at the Bouffes du Nord. She next moved to London for a whole series of roles in cinema, television productions and on stage.

The first play she directed – Beast on the moon by the American Richard Kalinoski – was performed in London in May 1996. It was at this time that Irina discovered her calling as a director. Deciding to focus on this, she directed Madame Klein by Nicolas Wright and Shakespeare’s All’s well that ends well. In 1998, she directed the French version of Beast on the moon (Une Bête sur la lune) at the Théâtre Vidy-Lausanne, then at the MC 93 in Bobigny and finally, after an international tour, to the Théâtre de l’Œuvre in Paris. The show picked up prizes in five categories at the Molière Awards (including Best Director and Best Private Theatre Play). She also directed a television version, for which she received the Mitrani prize at the FIPA [Festival International de Programmes Audiovisuels in Biarritz].

Irina is one of the rare directors who, at the invitation of Ariane Mnouchkine, has directed the Théâtre du Soleil troupe and with whom she revisited All’s well that ends well at the Avignon Theatre Festival.
In 2000, she directed Résonances by Katherine Burger at the Théâtre de l’Atelier. This went on to win her a Molière for the Best Female Newcomer as well as the SACD prize for Emerging Talent.
She adapted and directed an all age group version of Homer’s Odyssey, for the Sartrouville festival.

In February 2008, Irina was once again invited to direct The Glass Menagerie, this time with Japanese actors at the New National Theatre of Tokyo.
She devised En attendant le songe… a six-man version of A Midsummer Night’s Dream, originally produced by the Dedans-Dehors festival in Brétigny for outdoor performances in France and Switzerland. The play was programmed for three weeks at the Villeneuve-lès-Avignon festival, before heading off on a French and international tour, with a month at the Bouffes du Nord (December 2007).
The show was performed more than 300 times in France, Canada, New York and further afield.

In 2008, Irina formed her own theatre company in collaboration with Olivier Peyronnaud at the Maison de la Culture in Nevers. Around this time, she directed Somewhere… La Mancha based on the story of Don Quixote, which was performed at the Villeneuve-lès-Avignon festival in July 2008. This show toured throughout France and Europe (Amagro festival, Yerevan Festival amongst others…)
Passionate about music, Irina went on to stage several operatic productions. She began with The Magic Flute, co-directed with Dan Jemmett, for the Reisopera in the Netherlands, under the direction of Ton Koopman.

She directed Eugene Onegin at the Aix-en-Provence festival, followed by La Cenerentola initially at the Théâtre des Champs-Élysées, then at the Teatro Communale de Bologne and finally at the Royal Opera of Stockholm. Irina went on to direct La Traviata, in Bologne and in Lille, then Handel’s Giulio Cesare at the Théâtre des Champs-Élysées.
In 2007, she was invited to the Teatro Real in Madrid to direct Il Burbero de buon cuore by Martin y Soler. This production was then reprised in 2011 in Barcelona.

Since 2009, her theatre company has continued breathing life into its shows: Une Odyssée,En attendant le songe and Somewhere… la Mancha. The latest show is Tempête ! based on Shakespeare’s The Tempest.
In 2010, Irina presented her new production at the Mama in New York: Shakespeare’s sister ou la vie matérielle, adapted from writings by Marguerite Duras and Virginia Woolf and accompanied by original music by Sadie Jemmett, one of the show’s performers.
2011 saw the production of PAN, her version of Peter Pan, at the Théâtre de Paris.
In July 2012, Irina was invited by the Salzbourg Festival to direct Ibsen’s Peer Gynt, and to perform Tempête !.
In 2013, Irina reinvented her company, which took the name Irina’s Dreamtheatre in collaboration with the producer-literary agents Marie Cécile Renauld and Marie-Astrid Périmony.
In January 2013, she invited the cast of Shakespeare’s sister ou la vie matérielle to rework the show, this time in French, for a short French tour organised by the Maison de la Culture in Nevers and the Nièvre. The show was then reprised in September / October 2013 in New York.

Irina’s Dreamtheatre was invited to the 2013 Spoleto Festival with its latest production: La Trilogie des Îles (The islands trilogy) [Odyssée, Tempête! and L’Île des esclaves], where the company was awarded the Air France prize for most original stage direction.

It was in January 2014 that Irina Brook was appointed Artistic Director of the Théàtre National of Nice, Centre Dramatique National Nice Côte d’Azur.

In June of that year she reprised Odyssey performing in various gardens and museums around Nice. In September 2014, she staged Ibsen’s Peer Gynt – the show was also performed at the London Barbican Centre in the October and continued to tour throughout 2016. In January 2015, she directed Shakespeare’s Sister (La Vie Matérielle) by Virginia Woolf and Marguerite Duras, a production that also went on tour in 2016. She staged Hov Showwith the actor Hovnatan Avedikian in December 2014 and reprised Tempête! based on Shakespeare (February 2015).
Irina Brook also directed two operas by Gaetano Donizetti: L’Elisir d’Amore at the Deutschesopera in Berlin in April 2014 and Don Pasquale at the Venice Opera in April 2015.
During the 2015-16 season, she continued with Hov Show, produced Terre Noire (Black Earth) by Stefano Massimi, Lampedusa Beach by Lina Prosa, with Romane Bohringer and created the Reveillons-Nous! (Wake Up!) Festival in November / December 2015, based on the COP21.

During the last season – 2016/17 – Irina directed Point d’Interrogation, (Question Mark) a show that was performed between November 18th and 26th 2016. Terre Noire was reprised in January 2017 before leaving on tour, as well as Lampedusa Beach, in January 2017. On November 12, 2016, Irina organized an innovative, day-long marathon (My Body, My Planet) that gave centre stage to local players in the fields of renewable energy, organic and locally produced food, alternative solutions for our well-being & health.. all with the common goal of being both respectful of the environment and of human-beings. The day was a resounding success, attracting 3000 visitors!