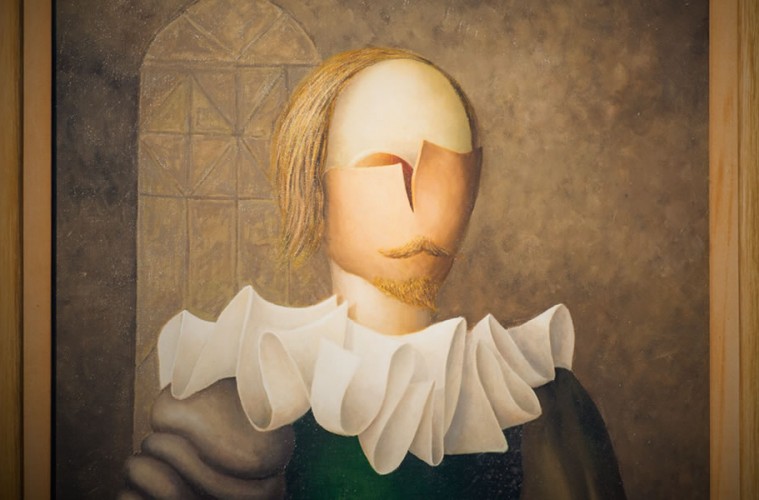 The greatly admired Argentine artist Juan Carlos Liberti (1930-2014) was born in Buenos Aires. He has a successful business career until 1970 when he discovered his true calling: Painting.

Liberti finds in surrealism the perfect form of expression, becoming a perfect representative of the genre. He was friend of Borges and he illustated some of his works.

“We have questioned Liberti about the possible literary connotation of these works that culminate in the series devoted to the characters of Shakespeare’s Hamlet. Liberti tell us about the nature of his readings.

It would not have been difficult to guess that along that line he is more interested in the world of fact rather than in the world of fiction. He is obsessed with facts and specially with visual facts.
When he reads he tries to nourish himself with learning about what has really happened rather than about the realm of imagination, and he pursues this curiosity. We know that the library of Velazquez abounded in books of science, and that those of imaginary literature were conspicuously absent. In this sense Hamlet and poetry in general with Liberti are true exceptions.

He tell us that though he was moved by Shakespeare’s tragedy, the result of his reading translated itself into visual imagery rather than thought. He was compelled to project visual forms that corresponded to the intensity of his feelings. When he worked on the series of lithographs that were published in the volume of my Hamlet translation, Liberti did not yet know about the similar work done by Delacroix.

It was a source of satisfaction to him to realize that his images correspond almost literally with those that had inspired the great French Painter. It would be a mistake to imagine that because these works have a literary source of inspiration they are what is called literary painting. Quite the contrary, because of their intrinsic nature they represent some of the most plastic achievements in the work of Liberti.

The great theme or source of this series, worked as a motor that put into motion this gallery of characters, like a plastic equivalent of Shakespeare’s hot imagination. This is true each time that Liberti has translated these themes to the realm of painting. It’s not easy to put the bell around the cat’s neck, and the fear to relate to the great themes of literature is explainable considering that not every artist feels capable of resisting the charge of creating motifs that maintain their plastic autonomy in spite of the literary source of his inspiration.

To be inspired by Hamlet or any other poetic classic without falling into the realm of illustration is a hard test for any artist, and we may say with relief that Liberti emerges triumphantly from this test.

We can recall in order to measure the magnitude of the achievement, the already mentioned works of Delacroix, or some water colours of Blake inspirared by the Divine Comedy. It is also a fact that the whole of Renaissance Art found its inspiration in biblical and mythological subjects but, never betrayed the plastic genius of its creators. Ophelia’s madness, the repentance of Claudius, or Hamlet’s soliloquy with the skull in his hand, speak well of Liberti and Libertis, that emminently classical tradition that has never feared the tempests of the soul, for each time it is able to subdue them to the metrics of a sonnet, or the geometric and scientific precision that underlie the architectural composition of Raphael or Leonardo.

With an equitable and precise temper, with discipline and “ostinato rigore” the art of Juan Carlos Liberti advances like the star of Goethe, with neither pause nor haste. It is not easy to surprise Juan Carlos in a mood of absent-mindedness, but if I have ever surprised him in such mood, I believe to have caught in his eyes the glimmer of a compassionate heart, that does not exclude a will of iron nor the sagacity of a true son of Genoa.”

See the e-books published by Fundación Shakespeare Argentina in 2011: