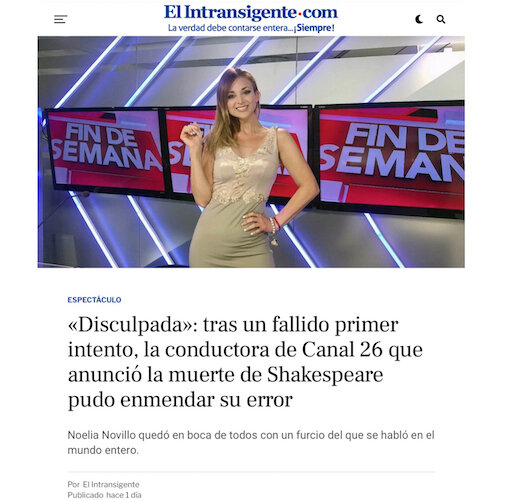 Apology: The Channel 26 Host who announced Shakespeare´s death was able to amend her error

We appreciate the mention of our institution in the article “Pardon me: after a failed first attempt, the Channel 26 host who announced Shakespeare’s death was able to make amends for her error” published on the digital site El Intransigente.

Noelia Novillo was in everyone’s mouths with a miss that was talked about throughout the world.

Two names that went viral this week, those of Noelia Novillo and William Shakespeare. The announcer and the English writer were linked because the Channel 26 host announced the death of the playwright who has been dead for more than four centuries, due to a great confusion that ended up becoming an international scandal.

The error´s origin was due to another person, as there might be many around the world, with the same name as the author of “Othello”, “Romeo and Juliet”, “Hamlet” and so many other fundamental works of Universal Literature. The other William Shakespeare, better known by the nickname Bill, had been the first man to receive the Pfizer vaccine against Covid-19, and died this week from causes that had nothing to do with that dose or with Covid.

“I knew what I was saying”: unusual explanation of the figure of Channel 26 that announced the death of William Shakespeare.

At the time of giving the news, the host believed that it was the playwright born in the 16th century, and considered that he was “one of the most important writers”, the one who was for her “the most important reference in the English language ». The mistake went viral, and she first rehearsed a justification, in which she said that “she knew what she was saying and commenting as always to all the people.” “I expressed myself wrong, I was missing a period, I was missing a comma, a parenthesis, I wanted to clarify something, I was wrongly explicit, and of course people misinterpreted it.”

This statement only made things worse, and in addition to criticizing her ignorance, they began to charge her for an alleged lack of humility, and to question the validity of the expression “I was wrongly explicit.” Then, he had to publish a second video, in which he said: “Sorry, sorry, sorry, know how to apologize, I admit my mistake, a mistake is made by anyone and here I am to face my fall. After a fall, you get up with much more strength ”.

The Fundación Shakespeare Argentina was the one that decided to free her from all guilt, after such repercussions. “For our part you are forgiven dear @noelianovillook. Thank you for your words. Your mistake made the whole world talk about Shakespeare. As this note says, even William Shakespeare himself would have had fun with it ”, they wrote from the foundation’s Twitter account. Subject Finished?