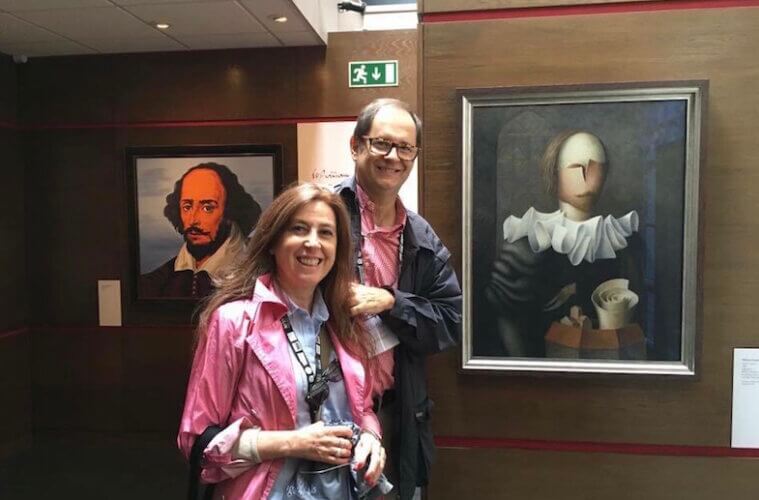 We share and appreciate the precious article from Graciela Melgarejo for the tenth anniversary of our institution published on June 12, 2021 on Noticias Positivas portal: 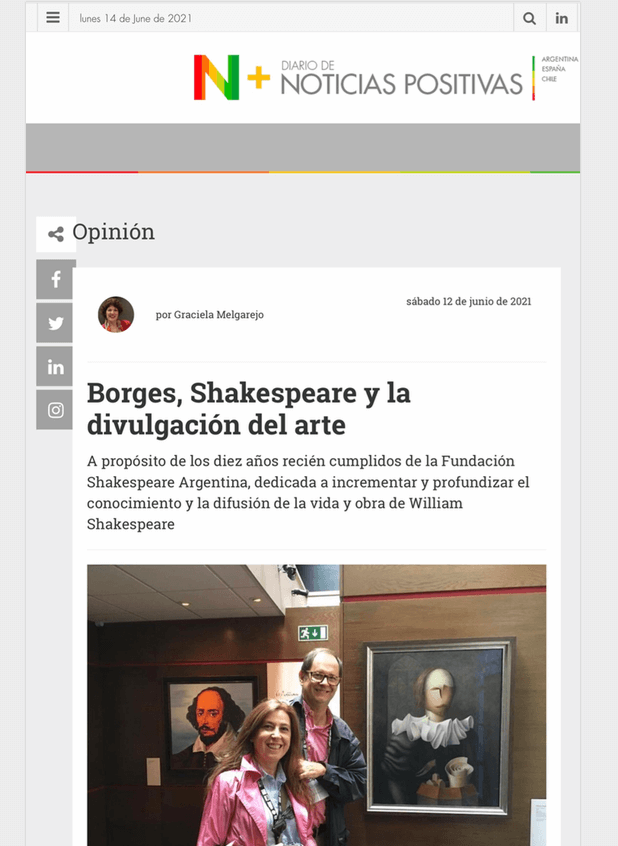 Borges, Shakespeare and the dissemination of art (by Graciela Melgarejo)

On the occasion of the recently tenth anniversary of the Fundación Shakespeare Argentina (FSA), dedicated to increasing and deepening the knowledge and dissemination of the life and work of William Shakespeare.

For the last ten years – which ended last month – the Fundación Shakespeare Argentina has been dedicated to increasing and deepening the knowledge, enjoyment, appreciation and dissemination of the life and work of William Shakespeare in the Argentine Republic.

What is the secret for Shakespeare to have such an impact in Argentina, so much so that there is a foundation like the FSA with such a fruitful trajectory and with such an impact? For example, it is enough to mention the staging of two comedies, in 2015 and 2019 (As You Like It and Much Ado About Nothing), with numerous ACE Awards and Nominations.

Perhaps the explanation lies in what Borges believes Shakespeare is to the world. In a recent series of tweets, Professor Martín Hadis, an expert on the work of our greatest writer, responded in this way to a question from a reader: “Borges always considered that Shakespeare was alien to English literature. Now, that idea doesn’t seem to make the slightest sense. What could Borges be trying to say by that statement of Shakespeare’s ‘foreignness’ or ‘not belonging’ to the English language? ”

Hadis immediately clarifies: «Borges himself was in charge of providing an explanation: ‘Shakespeare is, perhaps, the least English of English writers. I have always felt that Shakespeare is a bit of a foreigner in England. England is the homeland of understatement, of well-educated reluctance, of saying things a little less. Whereas Shakespeare is the antithesis of all that. Shakespeare’s work is full of excesses, agonies, splendors and hyperbole. All that is typical of Shakespeare and also of Italy. So Shakespeare is a bit foreign: he looks more like Italy than England. He seems, from time to time, an Italian poet. And maybe the English admire him for that, because he is so different from them. ‘

Borges’s gaze is always original and few are those who can make such a deep critical reading of Shakespeare’s entire work with just a handful of nouns and his singular point of view. No, it is not a Borges boutade, it is the genius of Borges referring to another genius of world literature like William Shakespeare.

With the same free spirit with which Borges exalts the great English writer, the Fundación Shakespeare Argentina specifies what is its task of dissemination: his work generating “a forum for national exchange with international projection”. [because] “William Shakespeare’s work feeds the spirit and enriches us as individuals and as citizens. We want to provide greater access to the poetry and charm of the works of William Shakespeare and encourage reflection on them, as a contribution to the cultural enrichment of the Argentine Nation”.

Task accomplished? Task accomplished and one that does not stop. For another ten years, then, FSA, to make ourselves feel contemporary with Shakespeare, and to enjoy and reflect with him and with access to his timeless work.