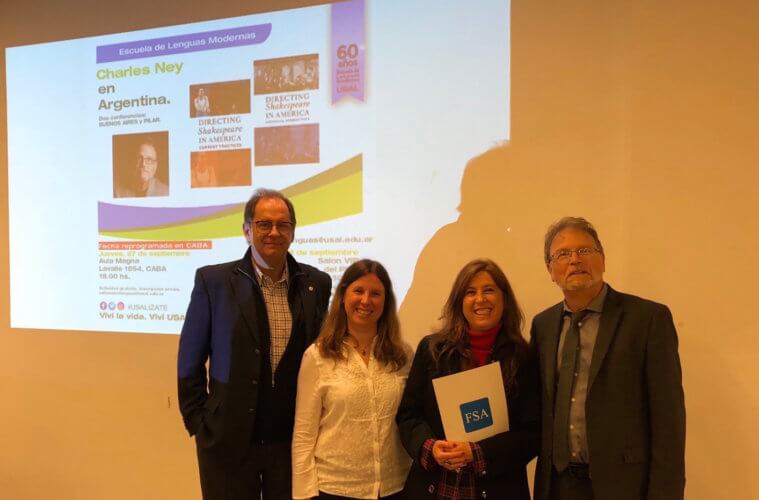 Fundación Shakespeare Argentina (FSA) and Universidad del Salvador (USAL) are proud to have hosted Dr. Charles Ney in Argentina. Dr. Ney delivered two lectures at USAL in Buenos Aires and Pilar. His lectures in Argentina referred to his wonderful research “Directing Shakespeare in America” and were much appreciated by students, teachers, researchers and enthusiasts. The lectures were translated into Spanish in a collaborative activity with Translation & Interpretation students and teachers from USAL.

We thank Texas State University for making possible for Dr. Ney to visit our country. 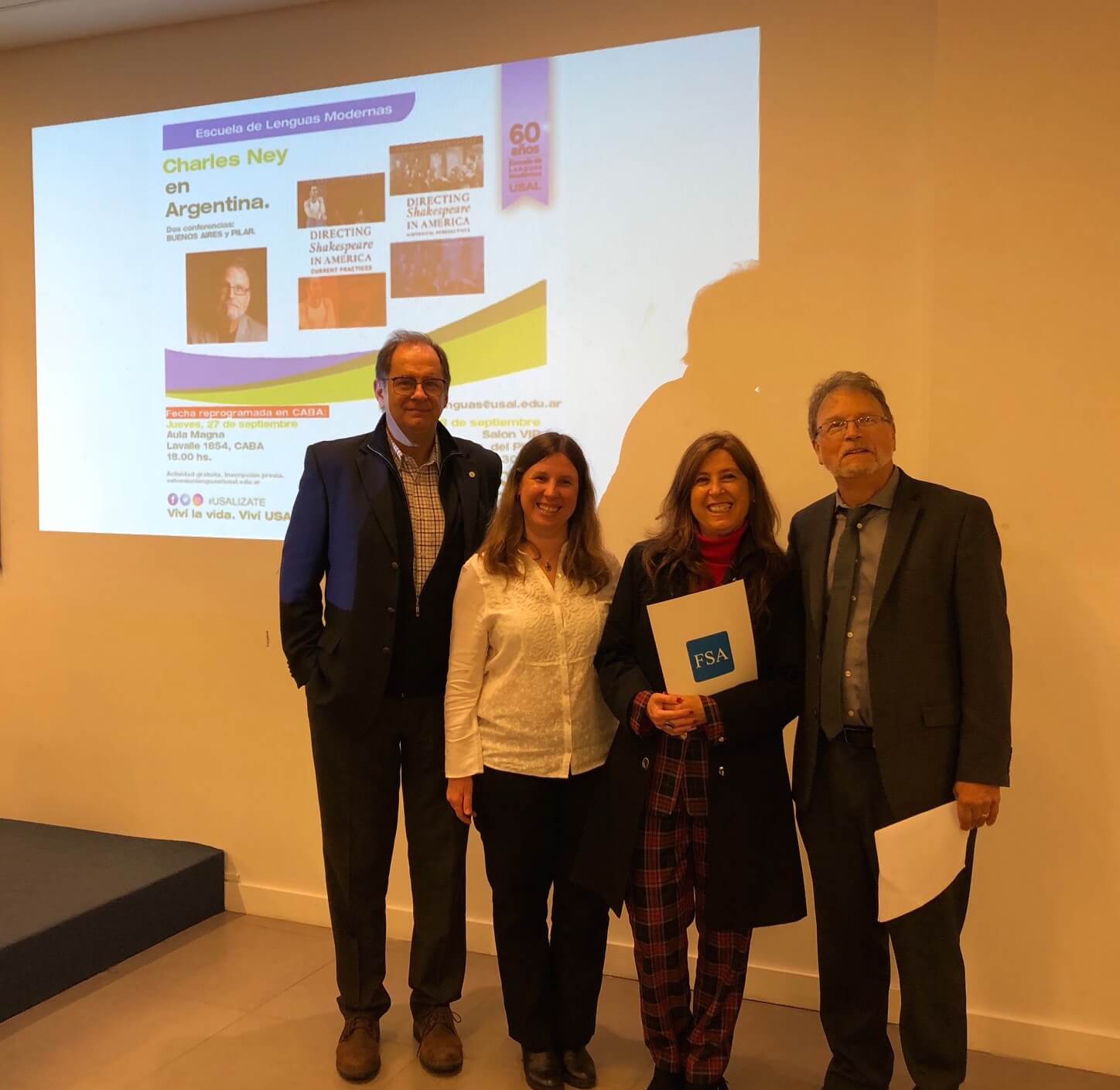 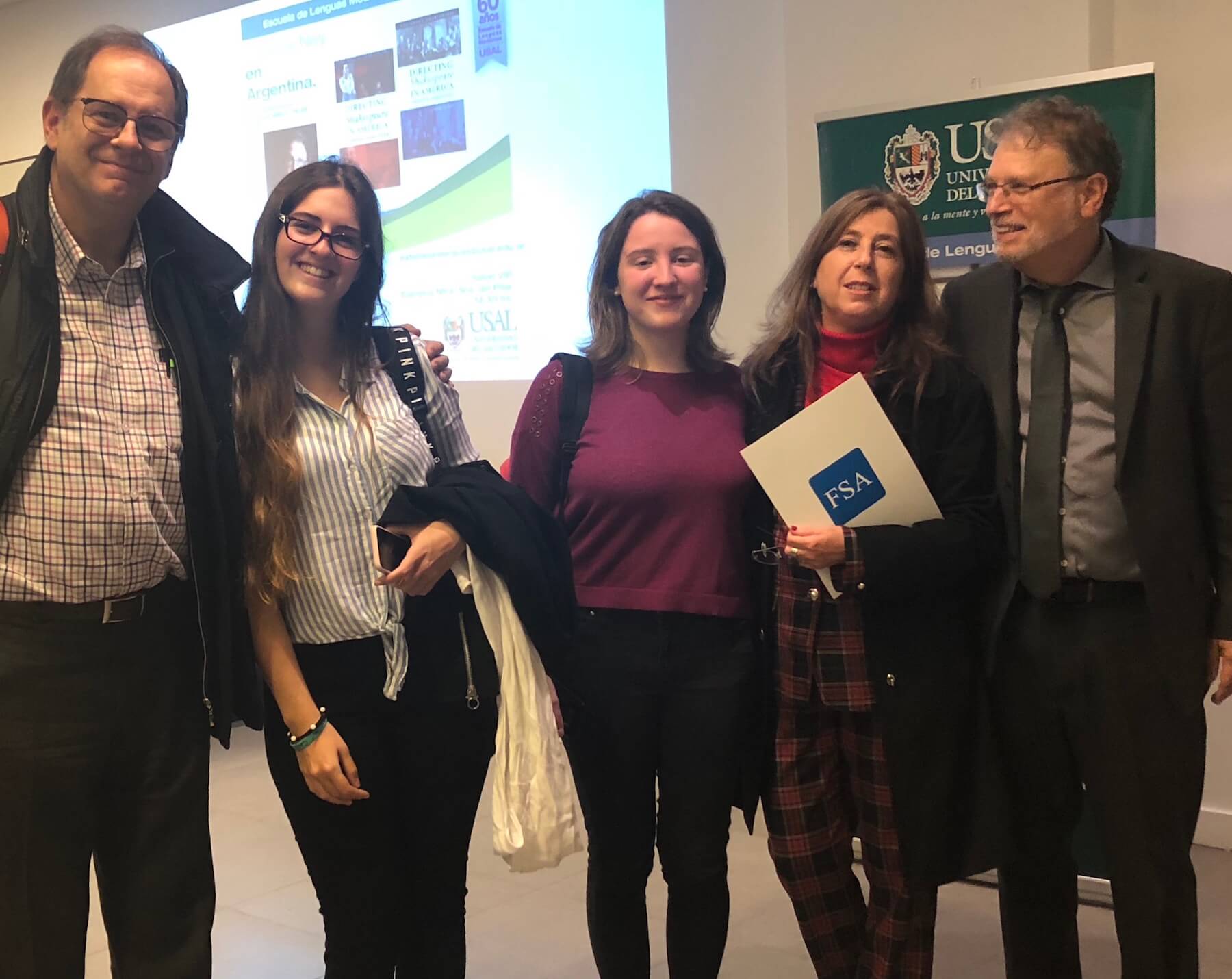 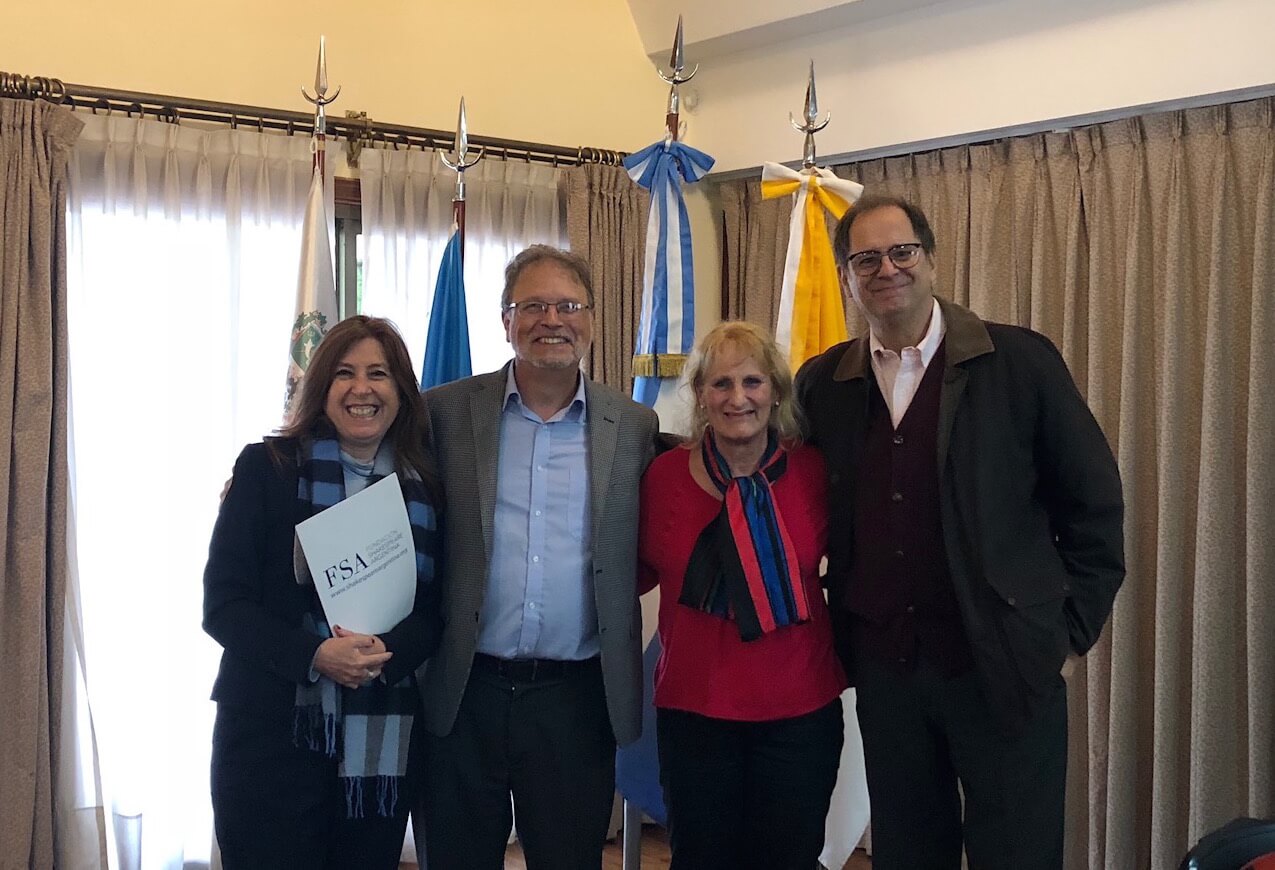 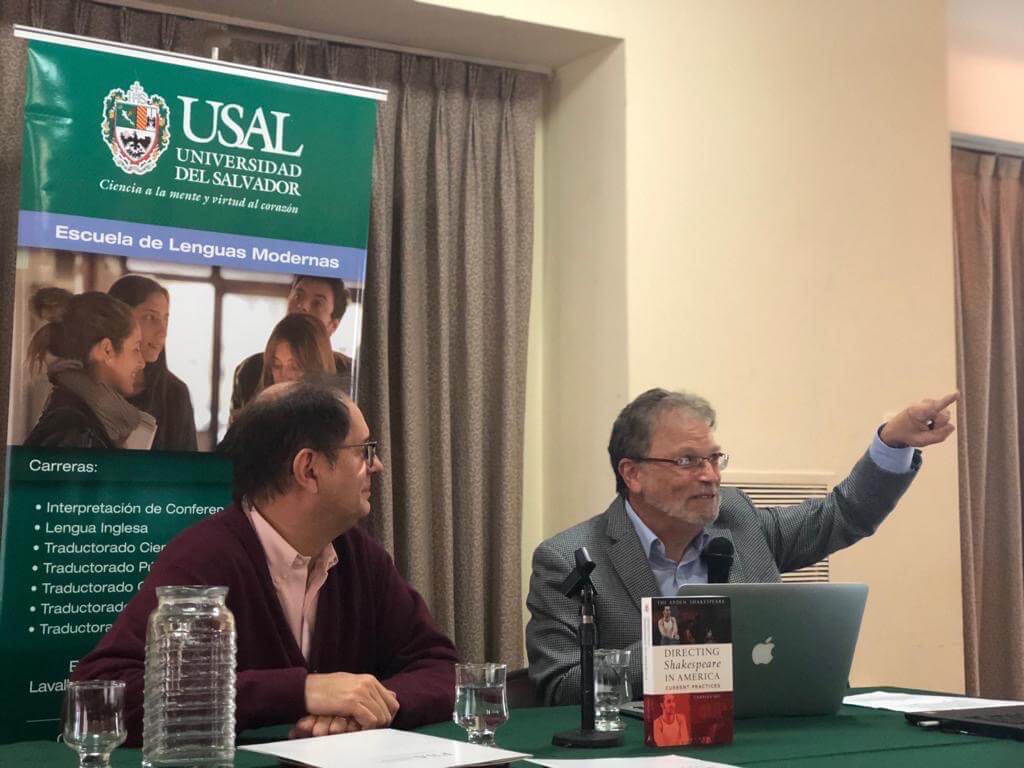 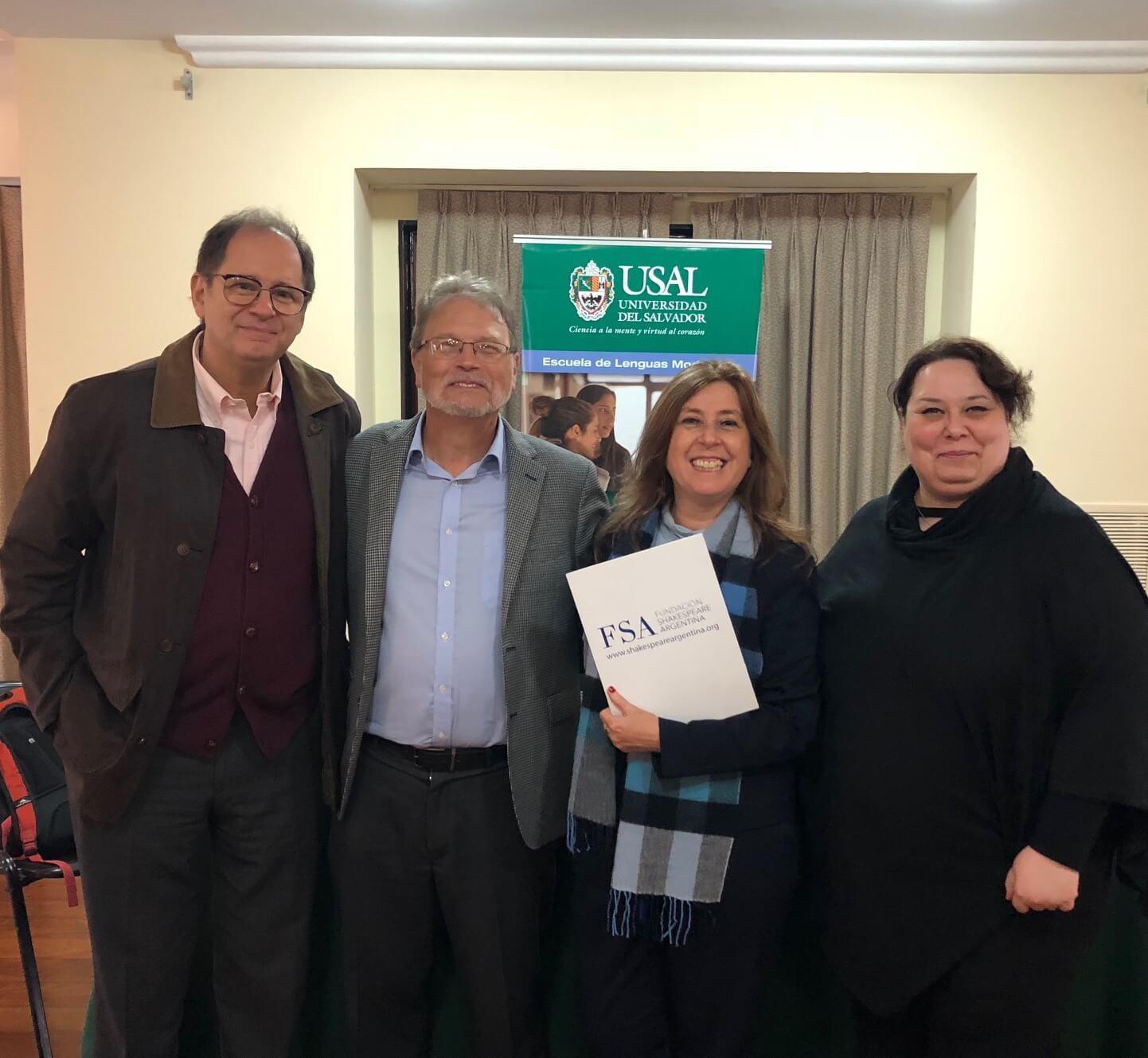 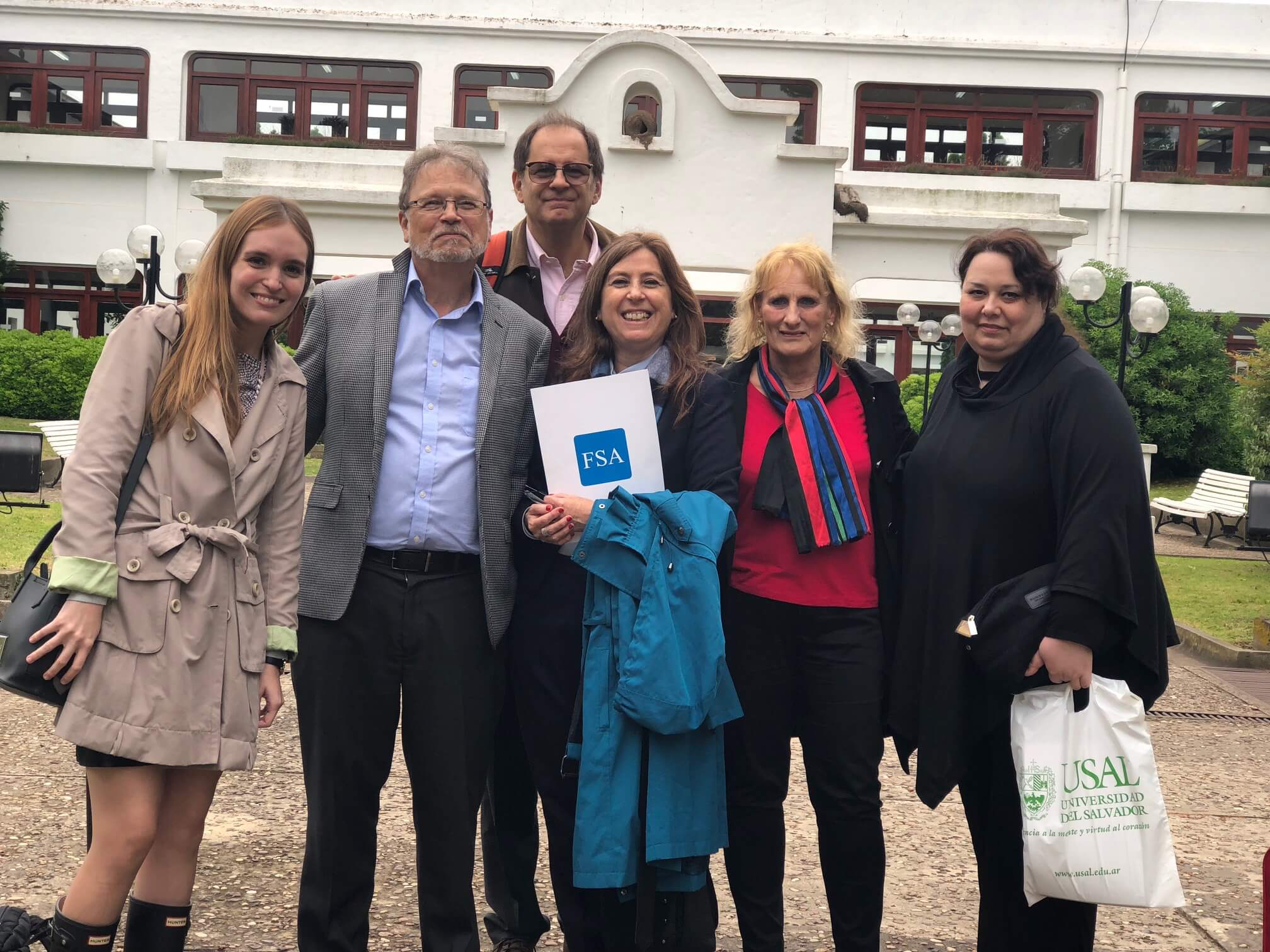 Interview to Carlos Drocchi (Director of the FSA) on Dr. Charles Ney`s visit:

Charles Ney is a professor in the Department of Theatre & Dance of the Texas State University where he is head of directing. Past positions include artistic director at Idaho Repertory Theatre, Manhattan Clearing House, and Mary Moody Northern Theatre.
​
Charles has directed at the Kennedy Center (Top Girls), Manhattan Theatre Club (Going After Cacciato), Illinois Shakespeare Festival (The Comedy of Errors), Texas Shakespeare Festival (Measure for Measure, Cymbeline, The Comedy of Errors), Idaho Repertory Theatre (A Midsummer Night’s Dream, Two Booths and a Lincoln, Lost in Yonkers), Mary Moody Northen Theatre (Medea, Chicago, Fences, The Threepenny Opera, Playboy of the Western World), and Zach Theatre (On Golden Pond). His Texas State directing credits include A A Midsummer Night’s Dream, Richard III, As You Like It, Macbeth, Much Ado About Nothing, Going after Cacciato (world premiere of Romulus Linney’s adaptation of Tim O’Brien’s novel of the same title), A Little Night Music, Transposing Shakespeare, and Tongue of a Bird. Acting credits include Leonard in Seminar, Polonius in Hamlet, Henry Boyd in The Two Lives of Napoleon Beazley (for which he was nominated outstanding lead actor – Austin Circle of Theatres) and Nonno in ​Night of the Iguana.

He holds a PhD in Theatre from the University of Illinois and an MFA in Directing from Southern Methodist University where he spent an additional year’s training in their MFA acting program. He also has a BFA is from Illinois Wesleyan University. He was chair at the University of Idaho and taught at St. Edward’s University. He also heads a study abroad course, “Shakespeare in England”, every summer featuring classes with RSC actors at the Birthplace Trust in Stratford-upon Avon and with London theatre professionals at the Globe Theatre.

Since 2004 he has traveled to Shakespeare theaters coast to coast, interviewing over 70 artistic directors and directors about their working methods and productions. He has written articles for American Theatre on his work and just finished part two of book series, Directing Shakespeare in America:

Both are being published by Bloomsbury’s Arden Shakespeare division.
​ 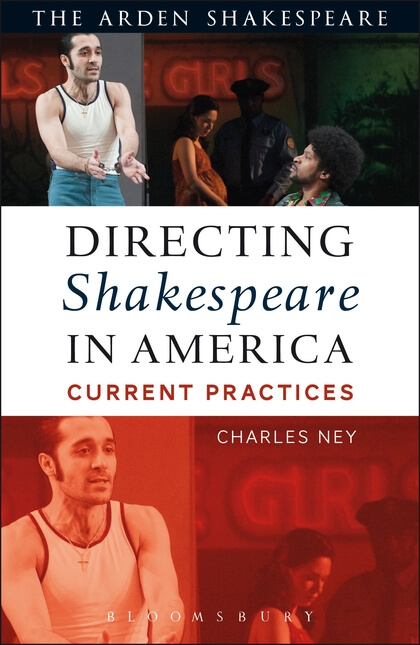 In this first substantive study of directing Shakespeare in the USA, Charles Ney compares and contrasts directors working at major companies across the country. Because of the complexities of directing Shakespeare for audiences today, a director’s methods, values and biases are more readily perceptible in their work on Shakespeare than in more contemporary work. Directors disclose their interpretation of the text, their management of the various stages of production, how they go about supervising rehearsals and share tactics. This book will be useful to students wanting to develop skills, practitioners who want to learn from what other directors are doing, and scholars and students studying production practice and performance.

“[Ney’s] research is impressive and unique.” –  Times Literary Supplement“Mr. Ney sets a new standard for the study of directing Shakespeare in the USA, deftly interviewing leaders in the field and opening up the remarkable visions, unique processes and historical research that drives the production of the Bard’s work in festivals and theatres nationwide. . . . No doubt, Directing Shakespeare will be a welcome text for classrooms worldwide providing students with the “best practices” of notable directors . . . It’s also a great read for seasoned professionals seeking a glimpse into the personalities and process of many of America’s most successful directors.” –  Quarto“Charles Ney’s Directing Shakespeare in America: Current Practices is an illuminating and much-needed resource for directors, scholars, students, and Shakespeare aficionados … Ney demonstrates a remarkable ability to curate this wealth of wisdom in a way that is compelling and easy to follow … The book is engaging as a straight read-through, but it’s equally useful for the reader that wants to skip ahead and explore concise essays on various topics, such as approaches to table work, or how to navigate tech and previews. These practices are invaluable for directors of Shakespeare, but can be more broadly applied as resources for directing any kind of live theatre … Ney’s book astonishingly avoids privileging one approach over another. This is a study that attempts to truly capture diverse approaches and contextualize them … This book is an effective snapshot of an incredibly diverse body of work and a must read for Shakespeare directors, scholars, and enthusiasts.” –  Journal of American Drama and Theatre“Ney and his interviewees convey the vitality of performances recreated through the eyes of those who headed them … The book records stage practices at a moment in time when some of the boldest directors are relaying their understanding of Shakespeare’s theatre by scanning its longer history of production.” –  Methods: A Journal of Acting Pedagogy“Ney’s incisive introductions to each chapter cogently frame the emergent patterns of thought vis-à-vis each topic without eliding their inherent contradictions and complexities and could well stand on their own as a survey of contemporary practice that is both wide-ranging and rich in detail. Political, practical, and aesthetic issues all get a thorough and inclusive treatment bound to stimulate lively discussion in graduate level directing seminars … In addition to the immense practical value of its nuts and bolts approach to the entire arc of the directing process the book also provides a kind of meta-analysis of the beliefs and positions beneath the surface of contemporary Shakespearean practice and this is, perhaps, the book’s most compelling feature … Its potent combination of practical wisdom and abstract reflection make it a truly stimulating read for novice and veteran directors alike.” –  Shakespeare Bulletin“Directing Shakespeare is as much a tribute to prominent American directors of Shakespeare as a presentation of critical approach to staging Shakespeare’s plays … The book often reads like a roundtable discussion on directing, with Ney deftly leading the discussion … Throughout the book, readers will find pragmatic advice, amusing anecdotal examples, humor, and brutal honesty. Beginning directors will find Ney’s approach especially helpful because they can read the book from cover to cover for guidance through the directing process. It is likely that other directors will turn to the book for valuable insight while they are in the process of directing their own Shakespearean productions … It adds valuable insight and specific geographic perspective that is often absent in Elizabethan theatre studies … Ney uses the thoughts, reflections, and opinions of this broad group of directors and companies to create a wide-ranging, thoughtful, and inspiring conversation on the directing process and the purpose of theatre.” –  SDC Journal

“Illuminates the process of bringing Shakespeare’s plays to life on stage and makes an important contribution to both theatre history and theatre practice … Actors will find out what is required of a Shakespearean performer and what it takes to get hired in the first place. Critics and scholars will find a useful context to help them view and analyse the work. I would certainly recommend this book to anyone preparing to work with one of these directors, all of whom remain active in the profession.” –  Voice and Speech Review 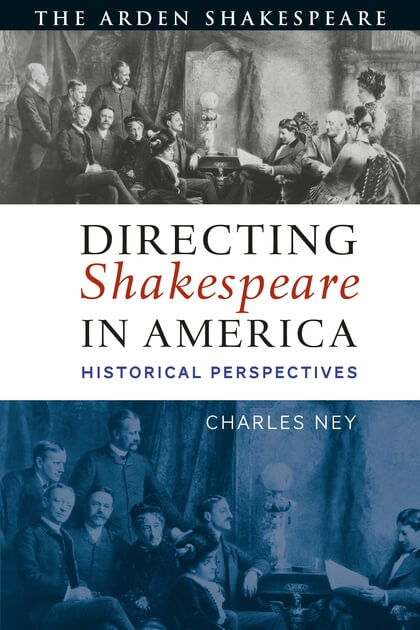 This unique and comprehensive study reviews the practice of leading American directors of Shakespeare from the late nineteenth to the end of the twentieth century. Charles Ney examines rehearsal and production records, as well as evidence from diaries, letters, autobiographies, reviews and photographs to consider each director’s point of view when approaching Shakespeare and the differing directorial tools and techniques employed in significant productions in their careers.

“Charles Ney’s book is a revelation-the research is impeccable and the anecdotes, directing lessons, visions, egos, mistakes and inspiration are brilliant as tools for seasoned or aspiring Shakespeareans.” –  Dr. Jim Volz, Editor, Shakespeare Theatre Association’s Quarto, USA, “For any and all lovers of Shakespeare this book is a fascinating resource. It has absolutely changed my perception of the ground we stand on as Shakespeare producers in the 21st century.” –  Bill Rauch, Artistic Director, Oregon Shakespeare Festival, USA, “Charles Ney provides an invaluable service distilling more than a century of stage practice into a compelling narrative that reminds us from whence we come – a must-read for any practitioner of Shakespeare the world over.” –  Ethan McSweeny, Artistic Director, American Shakespeare Center.