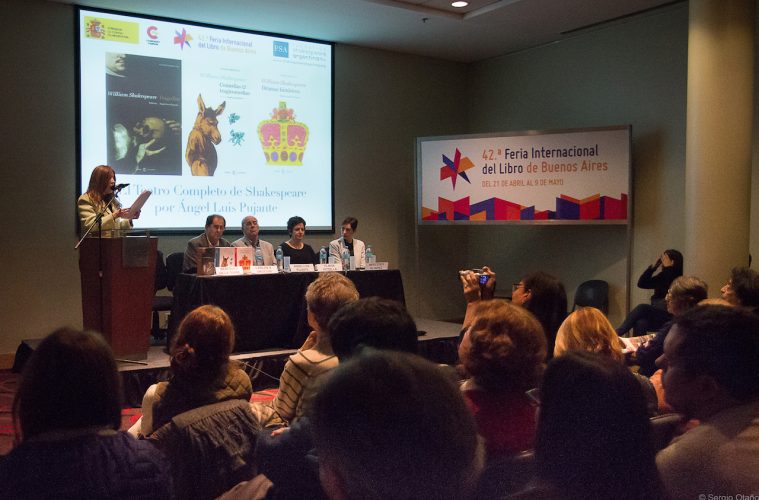 Homage to Shakespeare at the Buenos Aires International Book Fair 2016

Fundación Shakespeare Argentina (FSA) -sponsored by the Spanish Cultural Center in Buenos Aires (CCEBA) and the support of the Spanish Ministry of Education, Culture, and Development- organized a special homage to William Shakespeare on the 400th anniversary of his death at the 42nd Buenos Aires International Book Fair in 2016.

We were honoured with the participation of Dr. Ángel Luis Pujante, Emeritus Professor of English Studies at the University of Murcia (Spain) and editor and translator of the brand new Editorial Espasa edition of The Complete Works of William Shakespeare, in Spanish.

It was a great pleasure to be joined by Dr. Pujante, one of the most recognized Shakespeare specialists and translators in the Spanish-speaking world.

The enthusiastic audience that packed the room had the opportunity to attend a panel discussion, which revealed Dr. Pujante’s incredible dedication to Shakespeare and his thorough translation process.

The event took place on May 8, 2016 at 8:00 pm in the Alfonsina Storni Room (The White Exhibition Hall) at the Palermo Convention Center.

To see more photos of the event: http://bit.ly/1rUAz5c