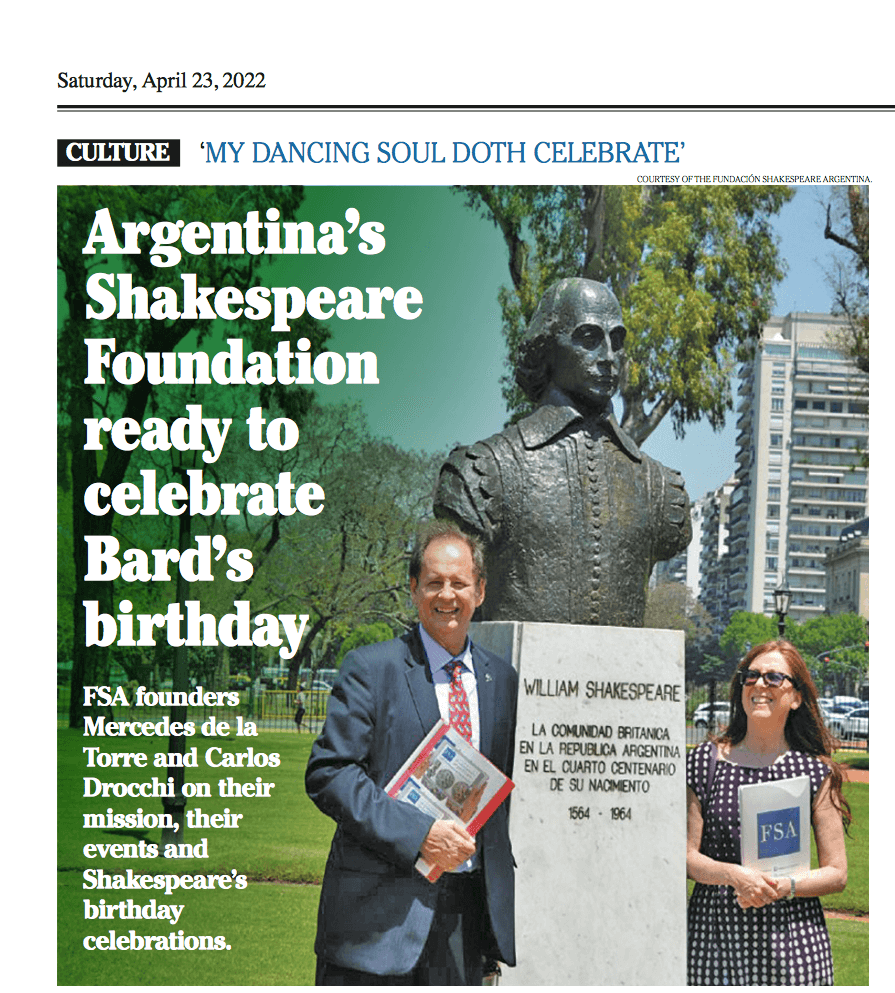 FSA founders Mercedes de la Torre and Carlos A. Drocchi on their mission, their events and Shakespeare’s birthday celebrations.

The Bard’s birthday will be commemorated on social media with a montage of video and artistic tributes by students, teachers and enthusiasts, all sent in to a foundation dedicated to bringing people together through the life and works of Shakespeare. The English playwright is to be celebrated in the best possible way: through his art.

The Fundación Shakespeare Argentina was founded in 2011 by Mercedes de la Torre and Carlos A. Drocchi.

De la Torre, the organisation’s president and a lawyer, says she first discovered Shakespeare through the theatre.

“I wanted to look for a place where you could learn Shakespeare, and there wasn’t one, so we created it,” explains the 58-year- old. “There were Shakespearean institutions all throughout the world, except for in Latin America.”

“It’s a necessary space for so many people, lovers of Shakespeare’s work,” she continues.

Co-founder Drocchi, 63, is also the executive director of the FSA.

Over the past 11 years, the organisation has hosted virtual and in-person events in Buenos Aires, participated in the Buenos Aires International Book Fair and put on two theatre productions (As You Like It in 2015 and Much Ado About Nothing in 2019) with its Compañía de Repertorio de la Fundación Shakespeare Argentina, among other accomplishments.

THIS IS MY BIRTH-DAY

Since 2012, the FSA has brought their academic and Shakespeare-enthusiast communities together to celebrate the anniversary of the influential playwright’s birth.

“We connect with many schools, with many professors, teachers, students, and they send us beautiful tributes,” says de la Torre, noting that submissions for this year are already coming in.

Shakespeare-lovers can take part in this year’s compilation through a reading of a text, a recitation of a sonnet or monologue, a performance of a scene or through other artistic contributions, in English or Spanish.

Submissions will be released on the foundation’s social media starting April 23.

ALL THE WORLD’S A STAGE

Though this year is Shakespeare’s 458th birthday, the playwright’s influence is as alive as ever in contemporary society, argues Drocchi.

Citing examples, he pointed to the 2012 London Olympic Games Opening Ceremo- ny, which was inspired by Shakespeare’s The Tempest, and Ukraine’s President Volodymyr Zelensky’s March 2022 speech in which he quoted Hamlet (“To be or not to be”).

“Shakespeare is present in the entire world, in every culture, and that brings us closer as human beings,” says Drocchi. “One culture to another.”