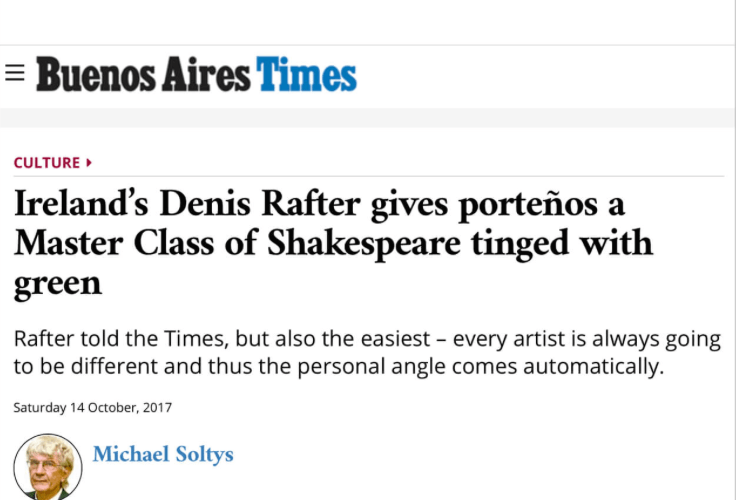 Irish actor-director Denis Rafter needed to draw a fine line in his Master Classes on William Shakespeare on his first visit to Argentina (and indeed Latin America) – to give that genius a personal (and Irish) touch without ruining the original, as so often happens.

That individual touch is the hardest thing in the world, Rafter told the Times, but also the easiest – every artist is always going to be different and thus the personal angle comes automatically.

The Irish connection is a longer stretch but Rafter had his answer pat for his Master Class in the Salón Dorado of the old City Hall – if Shakespeare could name one of his most powerful characters “O’Thello,” then he must have Hibernian roots.

The other theme of Rafter’s visit, Oscar Wilde, needs no such repatriation – indeed the playwright was born just 10 minutes’ walk away from Rafter’s own Dublin birthplace.

Rafter rhymes with laughter, the Times told the visiting actor – is Wilde’s famous wit the essence of his appeal?

But Rafter seems more interested in the tragedy of Wilde, in the last stages of his life – and not only as a victim. Rafter paints a more complex picture – of how Wilde was also the architect of his own destruction, provocatively flaunting his homosexuality and creating the evidence against himself, suing his persecutors before they took him to court. And yet Wilde still remains a genuinely tragic figure beyond the frivolity at which he excelled.

Back to Shakespeare and his Master Class – which was delivered in fluent Spanish (apart from the numerous Shakespeare extracts, of course), thus broadening his appeal. Although never in this subcontinent until last month, he has been a frequent visitor to Spain for almost half a century – since 1969 when Franco still ruled – and in his interview with the Times he showed himself deeply disturbed over the ongoing crisis of Catalan separatism, with both sides crossing the line in his opinion. As for the Master Class, a verbal description cannot do it justice – it has to be seen (and heard with Shakespeare’s timeless words occasionally breaking into music delivered with a very Irish tenor). The man is an actor – with almost no costume change but an abrupt switch in body language, he climbs right inside his various characters, mostly regal (Richard II of the “hollow Crown,” a heroic Henry V, a villainous Richard III and, of course, Prince Hamlet). Come again, Denis. 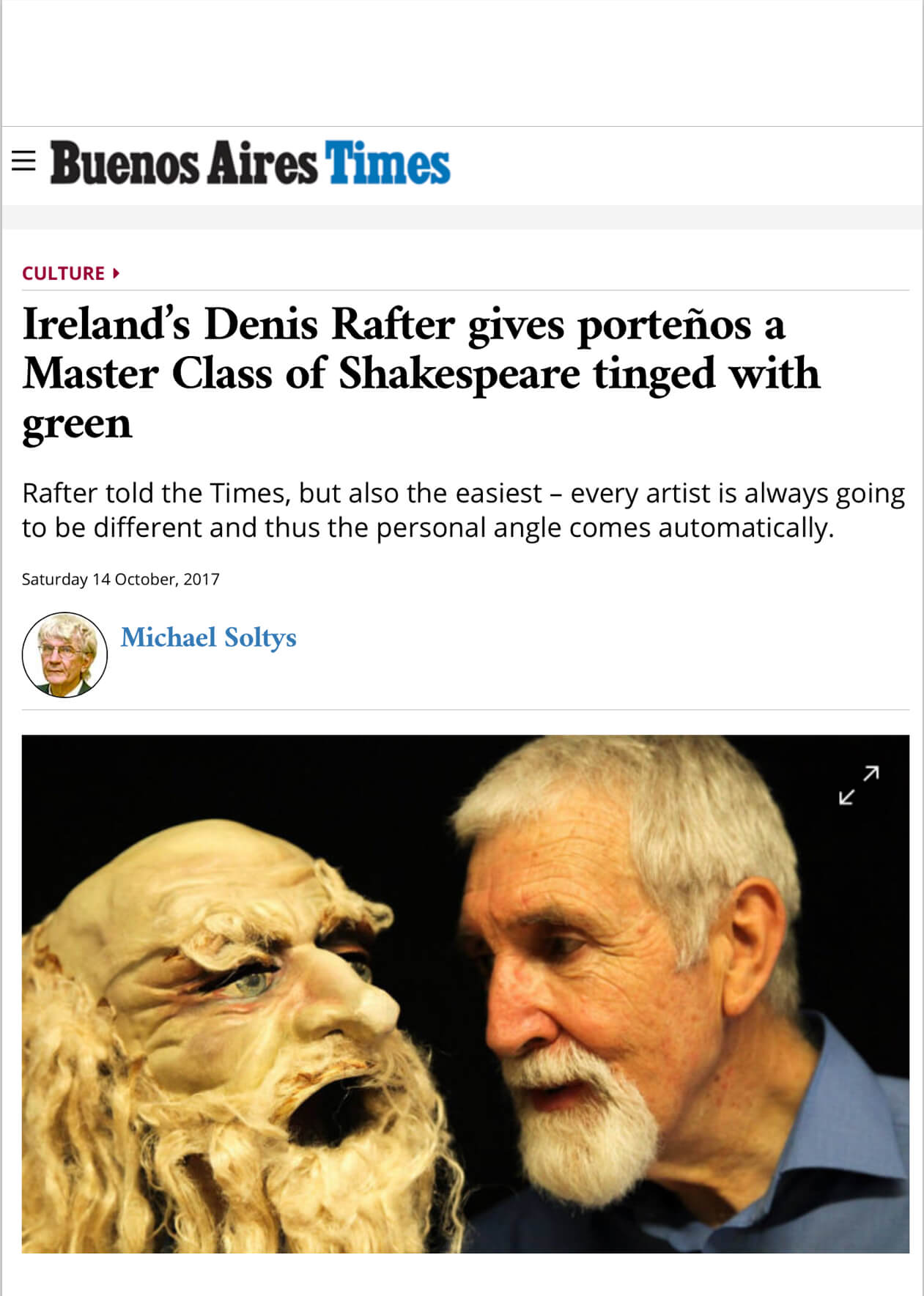 This website uses cookies to improve your experience while you navigate through the website. Out of these, the cookies that are categorized as necessary are stored on your browser as they are essential for the working of basic functionalities of the website. We also use third-party cookies that help us analyze and understand how you use this website. These cookies will be stored in your browser only with your consent. You also have the option to opt-out of these cookies. But opting out of some of these cookies may affect your browsing experience.
Necessary Siempre activado

Performance cookies are used to understand and analyze the key performance indexes of the website which helps in delivering a better user experience for the visitors.

Analytical cookies are used to understand how visitors interact with the website. These cookies help provide information on metrics the number of visitors, bounce rate, traffic source, etc.

Advertisement cookies are used to provide visitors with relevant ads and marketing campaigns. These cookies track visitors across websites and collect information to provide customized ads.

Other uncategorized cookies are those that are being analyzed and have not been classified into a category as yet.